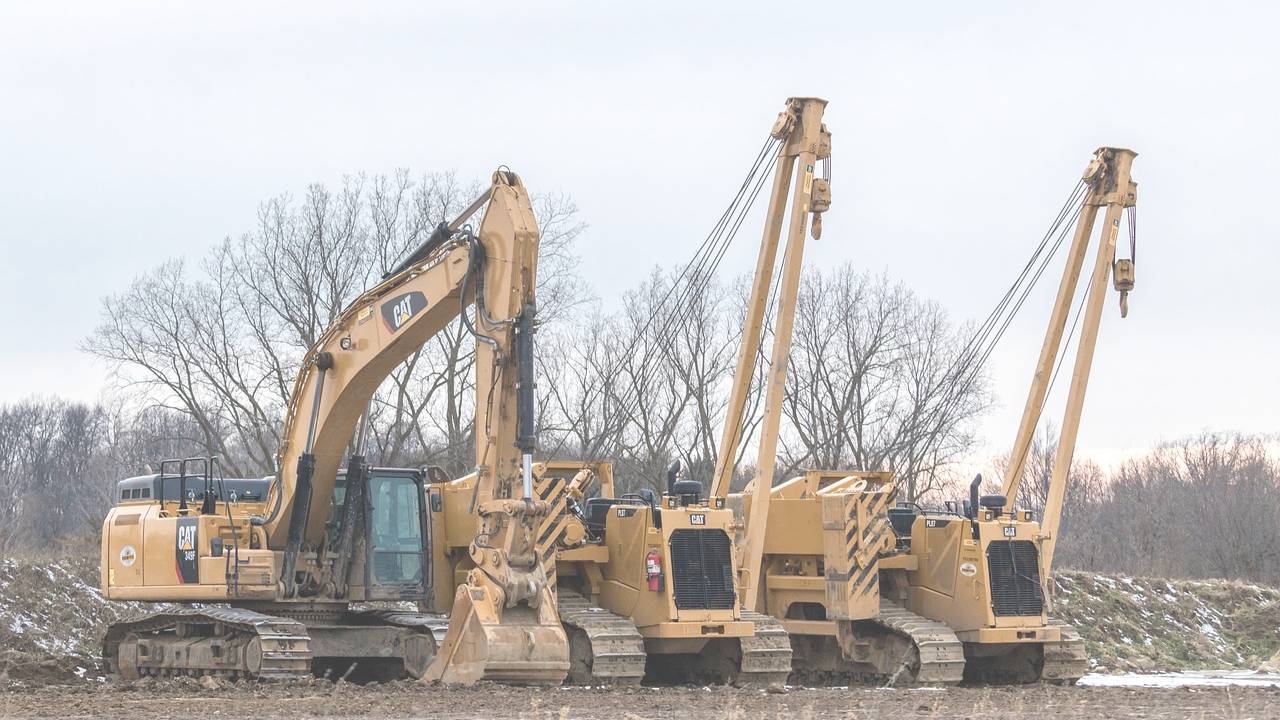 When choosing the appropriate equipment for Civil engineering works

Civil engineering is a noble profession that society heavily depends upon for the conveniences such as amenities as well as for housing services. Moreover, the construction operations that include road construction as well as the management of the wastes in the economy as well, require the input of a civil engineer.

However, civil engineering has been crippled by the increasing costs of production that is influenced by the scarcity of resources, the lack of appropriate equipment for the venture, as well as the insufficient manpower to enhance the service provision within this sector. Making a sound decision for the available equipment has been a key step towards the cost reduction process within the construction sector.

Contractors are often advised to consider the factors in play before they consider the kind of equipment to use. For instance, the constraints such as the lack of adequate finance should drive them to hire rather than purchase. Besides, for the long hours of operations within the sector, the contractors should consider buying equipment for the convenience of their operations as well as the long-term effect of cutting the cost.

Different machines and equipment perform different functions in the construction sector. It is always a key move to ensure that the most appropriate machine is chosen for the given operation to avoid wastages in terms of costs as well as the lack of precision.

The most common civil engineering machines that are used in the construction sector include; excavators, tower cranes, loaders, compactors, dump trucks, pile driving machines, and pavers. Their use is as discussed below;

Excavators are heavy construction equipment that has great versatility in use. They are the most commonly used construction machines in the civil engineering sector. Their use span a range of fiends that includes their use in home improvement, for home demolition, soil preparation, tree cutting, digging purposes, as well as for loading operations.

In the home improvement sector, excavators have gained use in the trench digging operations, in the shaping of land as well as wall selective demolition. Depending on the kind of implement mounted on it, it performs different operations.

When a bucket is mounted on an excavator, it can be used for trench digging, for lifting soil, for breaking of soft rock on the ground as well as for soil loosening purposes. When a bit is mounted on an excavator, their use is improved immensely, this is because they can be used for home demolition, for boring holes on the ground, and for breaking hard surfaces.

Blades mounted on excavators have as well been extensively used in the sector for cutting purposes. Currently, operations such as tree cutting which includes, as well the splitting of logs have been effectively achieved when blades are mounted on the excavators. This normally reduces the costs of operation especially for the contractors who own the equipment.

Construction operations normally involve tall structures that might be quite expensive if lifting the materials was to be achieved through other means. Through the use of tower cranes, the construction materials are easily lifted to the top of the building through the utilization of a system of pulleys in the tower crane.

Tower cranes are normally adjustable when in use. This, in essence, means that greater height as far as the building reach, can be surpassed by the tower cranes. They normally ease the lifting and the offloading of materials on a given structure.

The tower cranes as well are useful in the lifting of kentledge to apply forces on given structures or components. This is achieved by lifting it to a given high potential which in turn, is released on the components for the desired achievement.

Loaders as well, fall under the heavy construction equipment that is extensively used for civil engineering operations. Loaders perform the duty of lifting materials to the desired location such as lifting construction materials and putting them onto a dumping truck. The materials that are often lifted by the loaders include the soil materials, demolition materials as well as other debris from the construction sites.

Loaders are efficient as well where the materials to be transported are very bulky to the extent that they cannot be left barely for the effort of human labor. For instance, huge loads of precast concrete cannot be easily lifted through the utilization of human effort, therefore, the use of loaders is employed in such operations. This, in turn, ensures that much work is done under the utilization of a lesser cost of operation.

Most of the start-up companies that intend to move materials such as the coarse aggregate as well as other materials to the site normally have the trouble of acquiring this equipment. They normally have to undergo the high cost of hiring the trucks for the transportation processes. Still, hiring is the best alternative for startups and low capital companies.

However, in established companies, dumping trucks normally form one of their most valuable assets. This is because the construction services can be unrealistically expensive without the presence of these machines.

Clearing of the land process in the preparation for construction operations normally involves the removal of huge debris before the construction operations start. For instance, the construction of high-rise structures requires that if possible, the foundation rests on bedrock. For the removal of these soil materials to some distant location, the use of dumping trucks has been efficient and less expensive. This is because the dumping trucks can move the debris to a very distant place with the utilization of less fuel as well as the utilization of less human effort.

For the fuel consumption analysis, especially those that utilize diesel as the main source of energy. It has been recorded that the dumping trucks use less fuel in terms of gallons which in effect, minimizes the cost of their operation. This is why they can be used to transport debris that has less long-term returns within the operations to great distances especially when the truck belongs to the contracting company.

These are normally the equipment that is used for compaction purposes. Achieving stability within a given extent of soil requires that the compaction processes are done to ensure that the soil is stable for the construction processes.

Compaction normally improves the soil properties for given operations, for instance, compacted red volcanic soil is normally impermeable. This normally ensures that the rainwater that falls on it is lost through the runoff, unlike when it percolates and soaks the soil which in effect, leads to the settling of the roads and the existence of potholes.

Compaction as well is important for the reduction of the effects of soil erosion. When the compactors are used on the loose soils that are prone to erosion, they will be bound together, this, in turn, prevents the effects of the erosive action of rainwater. Within the murram roads, as well as paths, the compaction of the soil often ensures that the penetration of plants’ roots is eliminated, therefore, only grass can grow but not the deep-rooted plants.

There are instances where the foundation of a structure is key for the cases of difficult soils. In the event of such situations, piles are often used to hold the structure in position against the effects of the settlement of the soil. Fixing the piles normally requires a huge force for them to penetrate to the desired depth. Digging the ground and fixing it is often ineffective since the skin resistance is normally compromised.

The pile driving machines normally pushes the piles deep into the ground, to the depths reaching approximately the bedrock. As per the anticipated load, the combined base resistance as well as the skin resistance ensures that the pile can sufficiently sustain the load.

The pile driving machine normally utilizes the vibratory forces for the driving of piles. Besides, they are used to lift kentledge that is then released to drive the piles into the ground. Normally the bearing capacity of the pile after being driven is established through the resistance force on the kentledge. A suitable factor of safety is applied to the bearing capacity of the pile.

The removal of piles from the ground is as well done through the utilization of the pile driving machines. For instance, in the sites where a new structure has to be built after the demolition of an existing one. The piles that were used for the former structures may be deemed as an impediment for the construction of new structures. Therefore, the pile-driving machine can be utilized to uproot it from the ground.

These are normally the heavy construction equipment that is utilized to lay asphalt on roads, bridges, as well as on highways. They are custom-designed to lay the asphalt as well as perform minor compaction on the roads before the use of rollers as well as the compactors are put into consideration. These machines are normally duty specific and are characterized by their less versatility. However, road construction is a dynamic process that always has the machines in constant demand. Therefore, owning the machines means that much income can be generated when leased, as well as the good return on investment when used within the normal operations of the firm activities.

Having construction machines for civil engineering operations often ensures that the costs are reduced immensely. For startup companies, it is often recommendable for them to consider hiring until they establish a good financial base. Choosing the right equipment has the effect of reducing the cost immensely for the given individual tasks. When considering buying equipment, one should consider the most versatile that encompass most of the operations such as the excavators. This is because different implements can be mounted to it depending on the task at hand as well as the efficiency in the operation. As well, the task-specific equipment is also important, for instance, equipment such as the pavers, the few existing ones can be in high demand especially for the regions experiencing increased construction operations.