Talk to an Expert

Thank you! Your submission has been received!
Oops! Something went wrong while submitting the form.

By Category
By Manufacturer
By Material

Talk to an Expert
Equipment

Types of Crushers: What You Need to Know

Types of Crushers: What You Need to Know

The first US patent issued to a rock crushing machine was in 1830. Its key technology was the drop hammer concept, found in the well-known stamp mill, which would be repeatedly linked to the golden age of mining. Ten years later, another US patent was issued to a crudely conceived impact crusher. The device featured a wooden box, cylindrical wooden drum, with iron hammers fastened to it. While both of these patents were granted, neither creator ever marketed their inventions.

Eli Whitney Blake invented, patented, and sold the first actual rock crusher in 1858, it was known as the Blake Jaw Crusher. Blake’s crusher was so influential that today’s models are still compared to his original designs. This is because the Blake Jaw Crusher integrated a key mechanical principle – the toggle linkage – a concept students of mechanics are familiar with.

In 1881, Philetus W. Gates received a US patent for his device featuring the basic ideas of today’s gyratory crushers. In 1883 Mr. Blake challenged Mr. Gates to crush 9 cubic yards of stone in a contest to see which crusher would finish the job faster. The Gates crusher completed the task 40 minutes sooner!

The Gates’ gyratory crushers were preferred by the mining industry for almost two decades until the turn of the century, circa 1910, when Blake’s jaw crushers saw a resurgence in popularity. The demand for large-mouthed jaw crushers skyrocketed as the industry began to understand their potential as primary crushers in rock quarries. Through Thomas A. Edison’s research and development, giant machines were innovated and placed around the United States. Smaller-sized jaw crushers were also developed as secondary and tertiary crushers.

Edison’s studies within the field of mining and crushing left a legacy that forever improved how large rocks and materials are reduced.

Crushing is the process of reducing larger-sized material into smaller-sized material. The overall goal is to change its form to recycle it or repurpose it into new uses or dispose of it. There are four basic ways this is accomplished.

Impact: Unyielding, instant collisions of large objects against one another with material placed between. Both objects can be in motion or one can be still while the other strikes against it. There are two main types of impact reduction, gravity and dynamic.

Attrition: Rubbing the material between two solid surfaces. This is an appropriate method when reducing less abrasive materials because it consumes less power during the process. Robust materials would not be as efficient.

Shear: Typically combined with other reduction methods, shearing uses a trimming method and is used when a coarse outcome is wanted. This reduction method is often seen in primary crushing.

Compression: A key mechanical element of jaw crushers, compression reduces materials between two surfaces. Great for very hard, abrasive materials that do not fit attrition crushers. Compression is unsuitable for anything tacky or gummy.

Choosing the correct type of reduction method is unique to both the type of material and desired outcome. Next, you must decide which type of crusher is best suited for the job. Keeping energy usage and efficiency in mind is always a primary consideration. Using the wrong type of crusher for the desired outcome can create costly delays and consume more power than expected during the process.

As the name implies, this level of crushing is first. Run of Mine (ROM) materials are brought directly from blasting projects and entered into a primary crusher for the first round of crushing. At this point, the material receives its first reduction in size from its raw state. Primary crushing produces materials ranging from 1500mm to 350mm, on average. The two main types of primary crushers are:

Jaw Crushers: large amounts of material are fed into the “V-shaped” jaw of this crusher and are reduced using compressive force. One side of the V remains stationary while the other side of the V swings against it. The material is forced from the wide opening of the V to the narrowest point of the V creating a crushing motion. Jaw crushers are large-scale, heavy-duty machinery typically constructed with cast iron and/or steel. Often considered a basic machine, jaw crushers have their place in the industry. They are often used to reduce rock into non-uniformed gravel.

Gyratory Crushers: Run of mine material is transferred into a gyratory crusher’s upper-level hopper. The walls of the gyratory crusher’s hopper are lined with “V-shaped” pieces, the mantle and the concave, like a jaw crusher but shaped like a cone. The ore is discharged through the smaller bottom output hole of the cone. While the cone does not move, an interior crushing movement is created by a revolving shaft on a vertical rod. Continuous action is created making it faster than the jaw crusher with less power usage. Often smaller and more expensive than a jaw crusher, gyratory crushers are suitable for larger amounts of materials when a more uniform shape is desired.

After materials receive their first round of crushing, they are fed into a secondary crusher to be reduced further. Average material sizes range from 350mm to 100mm during this output stage. Secondary crushing is especially important in the quarrying industry.

Cone Crushers: A very similar concept to a gyratory crusher, however, cone crushers are not as steeply inclined inside their crushing cones. Cone crushers are one of the main choices for secondary crushing. Reduction occurs as the material is squeezed between the mantle and the concave. Pieces are reduced once, fall into a lower position, and then are reduced again. This continues until the material is small enough to fall out of the bottom opening. Cone crushers are suitable for medium-hard and hard materials. They are reliable and easily adjusted for lower operating costs.

Roller Crushers: As the name implies, a roller crusher reduces material by compressing it between two turning cylinders, parallel to each other. The cylinders are mounted horizontally with one resting on strong springs and the other framed permanently. Material is then fed between the two. They are separated away from each other by the desired material output size. Each cylinder is easily adjusted and lined with manganese for maximum long-term wear. Roller crushers typically deliver fine material output and are not suitable for hard or abrasive materials.

Hammer Mills and Impact crushers: One of the most versatile crushers available, hammer mills and impactors can be primary, secondary, and tertiary crushers. Hammer crushers use continuous hammer blows to shatter and disintegrate material. They are typically horizontal rotating in an enclosed cylinder casing. The hammers are attached to a disk and swing with centrifugal force against the casing. Material is fed into the top and crushed the falls through the hole at the bottom. You will find hammer mills being used in industries like agriculture, medical, energy, and beyond. They provide some of the highest-efficiency outputs available, are portable, and can handle almost any material.

Impact crushers have a very similar working principle except instead of the rotating parts hitting the material like a hammer, they instead throw the material against an impact plate which breaks it down. They also come in horizontal or vertical shaft configurations depending on the desired output.

Tertiary Crushing Equipment and Beyond

If after the secondary round of crushing, a tertiary reduction may be desired (sometimes even further). Particle sizes range from 100mm to 10mm during this final stage. Tertiary crushing is highly valuable in the mineral processing industry. The degree to which a material is reduced largely depends on how fine the material’s final size should be. More rounds of crushing equal smaller-sized results. Screening and multiple crushing sequences can also limit material waste. Some common tools used during the process are:

Conveyors: Moving raw materials and reduced materials from one stage of production to the next can be incredibly time-consuming. Modern mining and material handling methods now include extensive conveyor systems that can sometimes cover many miles. There are two basic kinds of conveyors, powered and gravity. Powered conveyors utilize energy from an outside source whereas gravity conveyors use the material’s weight to propel them.

Screening Equipment: If a piece of material is too large for the crushing machine to effectively handle, it must be removed. Screening equipment removes any material that will slow the production process. It sorts and classifies materials by size using a series of screens with different sized openings. These openings, or grids, allow small rocks to move along and large rocks to be excluded. If the material does not fit through the openings, it will be excluded from the next phase of the reduction process. Then, it is either sent back into the crushing process for further size reduction or removed completely from production. Screening equipment is crucial to an effective tertiary crushing operation as large material can take up needed space and consume valuable energy creating delays and costing money.

Let Us be Your Machinery Partner

The concrete, sand, asphalt, and gravel industries are always changing. Crusher manufacturers have expanded their offerings to include hybrid and compact models that increase mobility and usefulness. Watch your business grow with the right equipment for the right job. If you are in the market for a crushing material partner, be sure to look at our wide collection of online equipment stock or contact one of our helpful representatives for a customized quote today.

Equipment
What is a trommel?

A trommel is a mesh covered, rotating drum that can separate and sort materials based on their size. Learn more about trommels and how they work. 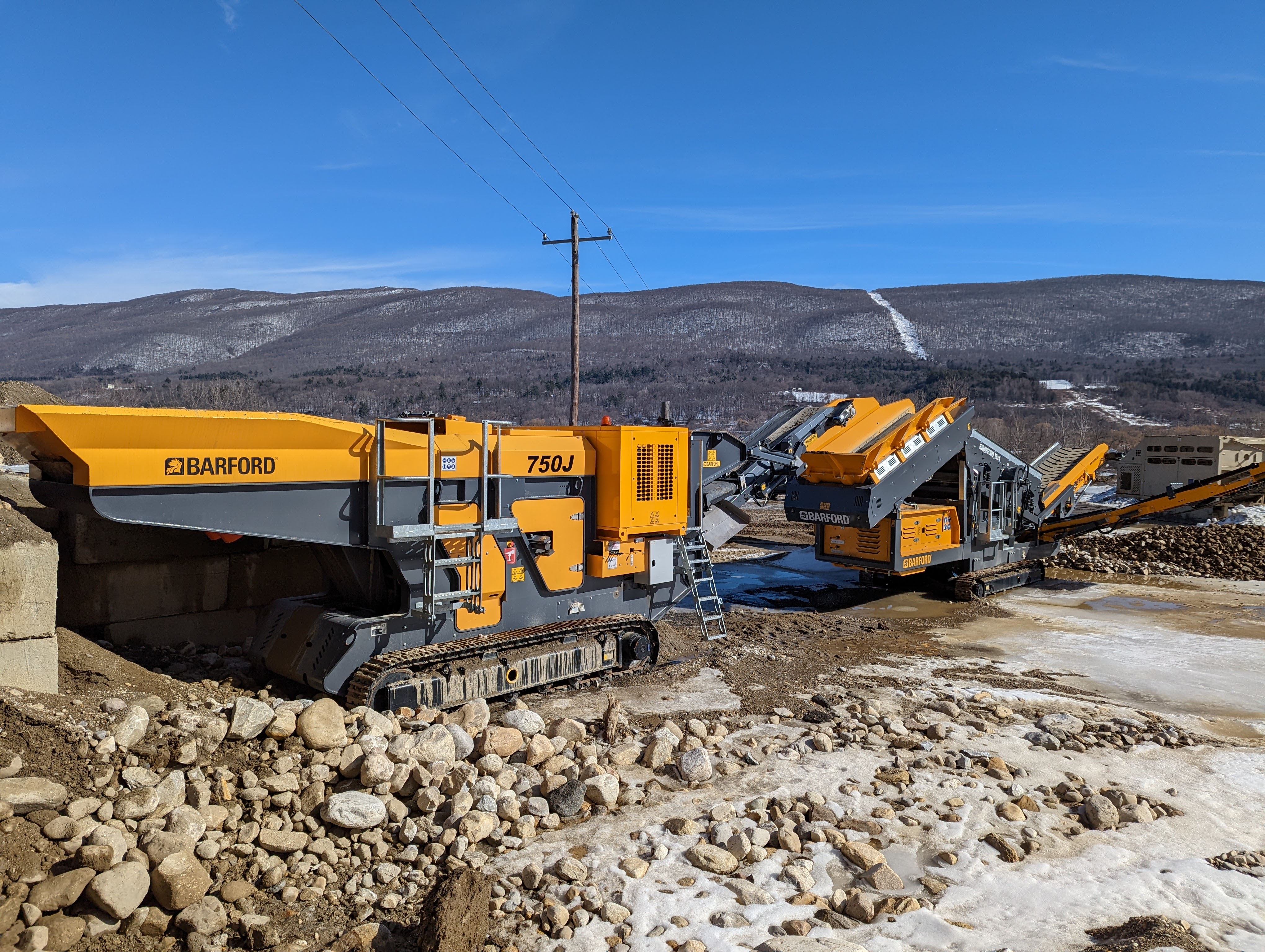 In this article you will discover the three different crusher types and we will help you choose the best concrete crusher for your business. 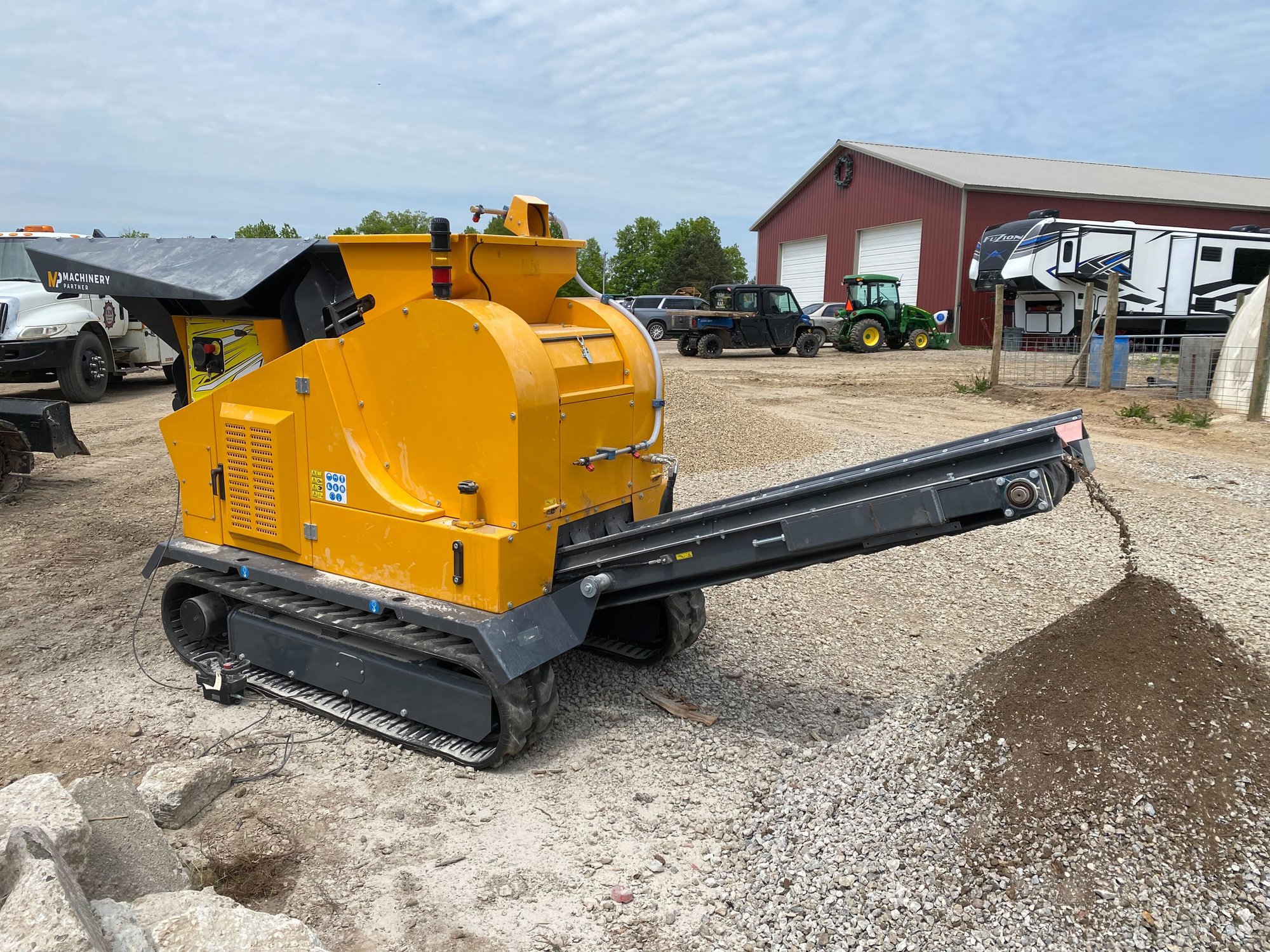 Equipment
Concrete Recycling: A Concrete Plan to Save $$$

How to make money, save time and the planet with concrete recycling. We will show you how to use crushers, screeners and conveyors to recycle concrete.

Have a question? Talk to an expert!